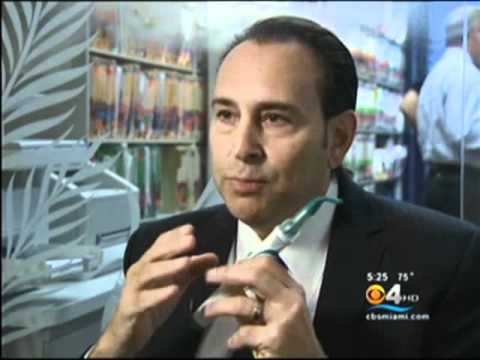 Studies show 50% of Americans avoid the dentist because they fear the pain. Well, what if the pain from an injection could be eliminated? CBS Forest Maribel Rodriguez tells us about a device created by a South Florida dentist that uses vibration to keep the pain away.

I mean, it would shake. I would sweat. I would panic.

Go only for an emergency. When emergencies would happen. I would go into the dentist. And when it was the worst case scenario, they had to pull a tooth.

Just a fear of coming through the door. A heartbreak, I get tired.

Her dentist, Jeffrey Feingold says her fear of needles is a common problem for patients.

Patients fear the dentist. They don’t come. And when they come, it’s the amounts of broken down, severe decay, bad gum disease

We’re so used to shaking the lip like this. As we give an injection, I thought, what if I take that one step further? What am I looking for in the science and what’s really going on there.

It’s based on the scientific gate control theory of pain that shows vibration travels to the brain very quickly while the pain sensation moves slower in comparison.

Feingold believes this will get patients who fear the dentist back in the dental chair. It sure worked for Desiree.

She had no pain during the injection. She felt no anxiety.

I didn’t even know if he was finished. I didn’t know the needle was in my mouth. I had no feeling of a needle being in my mouth for somebody like myself or anybody that fears a dentist and the needle. It’s the most amazing thing.

More than a thousand dentists across the country are already using the device, which as you can imagine is great for kids too. Dr. Goldberg says it is completely safe. Similar devices are now being developed for cosmetic injections like Botox and for diabetics who endured daily injections of insulin on the Health Watch I’m Maribel Rodriguez, CBS four news.