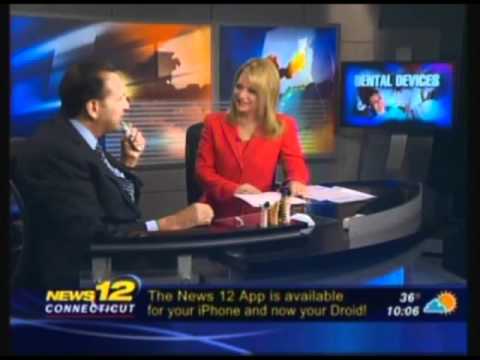 Everyone. Welcome to 12 on health. You’re watching news 12, Connecticut, as local as local news gets so many people avoid the dentist afraid of pain, but there are ways around that. Dentist, Stephen Goldberg is here to show us products that some local dentists use to ease your discomfort when they work on your teeth. Dr. Goldberg is the inventor of DentalVibe. What is DentalVibe? So is,

Well you, first of all, the good news is you don’t have to worry about going to the dentist anymore is a big fear of going. But these days with modern technology, it’s pretty much painless to go there at this point.

I appreciate your saying that, but not every dentist is as necessarily good at what you’re saying or using certain tools. Um, but I do agree that for the most part, dentists have found a way to keep us out of pain, we try as much as possible.

Let me tell you about DentalVibe. This is a device that I invented. It actually took me eight years to get to this point. What it is is that the greatest fear people have is the pain when you’re going to the dentist. And if you think about it, dentistry doesn’t really hurt a filling. Doesn’t hurt you. Even an extraction, doesn’t hurt, but injections do until now I’ve invented that.

So this is for the Novacane injection?

Actually it goes a long while you’re getting a shot. The dentist will take this device. It’s a little vibrating device. We made it look patient friendly. So it actually looks like a toothbrush. And when you turn it on, it has a little buzzing sound. So it sounds like a vibrating toothbrush. You’ll hear, you’ll hear this. You want to turn on, okay, I’ll turn it off at the moment. What a dentist does is places it’s in the patient’s mouth and then administers the injection at the same time that this is vibrating and will actually happen. It’s pretty amazing. The vibration travels faster to the brain than the sensation of pain. So vibration gets that first shuts a pain gate and does not allow you to feel the pain.

I mean, that’s phenomenal. I imagine you could apply this in other ways. Um, show us what you do for kids. I love this it’s kid friendly

Exactly for children. It’s incredible. Uh, of course it’s a very scary experience when a child’s going to get an injection. So instead of just taking out the syringe and about to inject and hold them down and say, hang on, what we do is turn into a good experience. So we have these little toys here, these little finger puppets, and the child will pick one of these out, out of a treasure chest. The dentist slips it on the back of the dental vibe here. Now this becomes sort of a toy to the child. You let them hold it, they turn it on themselves. They even put this in the mouth themselves and see what the vibration it feels like now, while the dentist is injecting, he places in their mouth. They’re looking at the toy. You come at them like this with the injection in 10 seconds, you’re done anyway. And all they remember at the end of it was, that was fun. I get the story to go home with. This is a great experience.

You might want to send this to the pediatricians for flu shots. Um, now you have the disposable tops. Um, and I think people appreciate that because anytime you go to the dentist or the doctor and they’re going to be, you know, going into your mouth with the tools, um, so what you supply them.

Sure, sure. I’ll I’ll explain what happens is that if this was just sitting on, on my counter in the office, a patient might think, Hm, was that in someone else’s mouth to avoid that, what we do is we have sterilize tips like this. So you have a new, fresh tip. Every time in front of the patient, every patient gets it. You rip it open in front of the patient. They got a new fresh tip and place it on the device and use it once you’re done with it, I’ll show you here. Tip actually comes off. It does tear and it gets thrown away.

Um, this sounds like it, it sounds wonderful for injections. Can it possibly be used during drilling because the drilling, um, can be painful in the hands of certain dentists.

I’ll explain it to that. That’s a very good point. You bring up, I’ve actually been touring the country now, visiting dental schools , we’re lecturing at most of the dental schools in the country. And we’re beginning to do some studies on just what you’re speaking about. This anxiety, not only before you come into the dentist and while you’re getting treatment done, but during a procedure while there’s drilling while there’s an extraction. So for instance, say a child has to have a tooth extracted. You’ve already gotten them numb painlessly with DentalVibe but during the extraction itself, just the maneuverability of the, of the dentist, hands in their mouth, taking out that tooth can be uncomfortable and frightening for a child.

So, and then adults as well, actually adults are just big children. We’re big babies.

Exactly. So if you take the device, place it in the mouth, it’s buzzing and vibrating while the distraction is going on, the child doesn’t know what’s going on before they know that the tooth is out. It didn’t hurt way coming out, but they’re nervous, but they hear the buzzing. They know this friendly instrument. They have the little toy on it. It’s a great,

What other advice do you have as a dentist? Apart from this, when somebody is going to the dentist, what can they do to help themselves in the pain department?

Well, uh, first of all, fear of the unknown is really the one key thing that makes everyone so fearful of going to the dentist, especially with children, if it’s the first, the first visit to the dental office, they don’t know what to expect. So it’s parents, you have to tell children what to expect. And there are great things to tell them. You could tell them that they’re going to sit in a chair and a dentist will press a button. And it goes back and turns into a couch that way, when the child gets leaning back, all of a sudden this chair is moving. They’re not nervous about it.

So preparing your child, talking exactly with them,

Exactly, let him know what to expect. Other things then just we’ll take an instrument. It’ll count your teeth. Of course, what we’re doing is checking for cavities on the surface. But as far as they know, we’re counting the teeth and you make children as a dentist, we make children. Part of that experience. You hand them a mirror, let them know what’s going on. We have something called Tell-Show-Do .You tell them what we’re going to do? Show them with a mirror, what we’re doing, and then we do it. And they’re part of the whole experience. Just the fact that they’re part of it

For them. And I think it’s great that you guys have treasure chests, that my daughter goes right for that. I mean, hook, line and sinker, you know, bribery at its best at its medical. Of course, of course. And for adults, they’re headed to the dentist. They’re nervous. Perhaps in the past before doctors got a handle on pain management, the way they have, I think people had some bad experiences at the dentist. Um, what can they do? It’s not all in the head. Some of them have been through some pain.

Sure. Well, you know, years gone back. Absolutely dentistry was somewhat painful, much more than it is today. If you go to a good dentist, who’s trained well and does have a great concern for patients, uh, they will treat you in a, in a, in a terrific way. The thing is, what you need to do is as an adult is talk to the dentist ahead of time. Let him know about your fears. If you tell them that you’re really nervous, they may treat you with a little more tender, loving care.