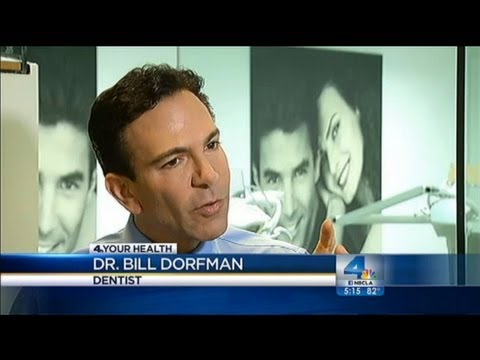 For Your Health today begins with a question. Are you one of those who does just about everything you can to avoid going to the dentist? Well, if the pain is your concern, our own Dr. Bruce Hensel is here with the new exclusive, painless way to get dental work pioneered by a well-known local dentist, Bruce.

This is the moment that every person dreads at the dentist, the needle, going into the gums.

Afraid because of the pain. The thing that’s killing me the most is one thing the injection.

Now there’s a device that can blunt the pain. It’s called DentalVibe. It looks like an electric toothbrush, but it’s actually equipped with a two-prong vibrating tip.

DentalVibe is used to retract back the lips. It also has a light in there so I can see exactly where I’m going to give the injection. And it gives this soothing kind of vibration. As it’s vibrating. I’ll go ahead and inject right next to the probe.

The vibration sends a soothing stimulation to the sensory nerves in a synchronized wave pattern. That’s controlled by a microprocessor. The waves reach the brain before the pain does

This vibration travels to the brain faster blocks the brain from feeling pain sensation and enables us to give an injection to the patient. And they don’t feel anything.

Did you feel anything?

Nothing. I told you. I didn’t feel anything at all. Honestly, that was my first time when I didn’t feel pain. I don’t think that I’m going to be afraid to go to the dentist again.

Now I’ll tell you a lot of people don’t believe this. Dr. Dorfman is somebody I’ve gone to before as well as other dentists, but I’ll tell you that I have tried this and I felt no pain whatsoever when the shot was given, but keep in mind, different people might have different pain because everybody has a different reaction. And keep in mind, we don’t endorse this. There are other choices for information. Go to our website@nbcla.com and search for painless dentistry. It’s certainly stimulated a lot of discussions here in the studio doctors. Thank you.