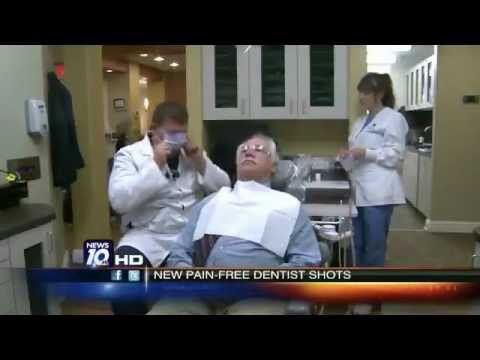 You’re one of them, millions who dread a trip to the dentist’s office. Good news. There’s a new tool helping to ease patient’s fears. It’s in South Carolina, Vandergriff Johnny’s has been out with more details. And a lot of people, here in South Caroline have a lot of anxiety about, you know, not even just first going to the dentist’s office, but even making a dental appointment.

Yes, more than 20% of Americans say they don’t visit the dentist because they’re scared of the pain. That’s according to the American Dental Association, the most recent survey that touched on dental anxiety. One mission dentist is now looking to put his patients’ fears to rest, but technology that virtually eliminates pain during dental procedures. Andrew Barclay’s fear of going to the dentist began when he was a little kid and just making an appointment, gave him nightmares.

So I would wake up in the middle of the night, I’d be worried and I’d be afraid that find a big cavity or you know, something terrible like that. And so all of my life, that was pretty much the way I regarded dentistry.

Barclay says he hated the pain from the injection use to deliver the anesthetic.

Most people are completely anxious about the needle and that’s where their anxiety lies, not with the actual procedure itself.

So to eliminate the pain from the needle, Okemos based, dentist, Dr. Eby began using a device called the DentalVibe. The handheld tool looks kind of like an electric toothbrush and it uses vibrations to block pain signals from reaching the brain.

And I generally place it on the tissue for about no more than 15 seconds. The sensation of the vibrations travel faster than the pain from the anesthetic. How was it? I didn’t feel a thing.

Dr. Eby is one of the only dentists in mid-Michigan to use the DentalVibe.

And our practices has been really successful for helping people get over the anxiety of the needle.

Barclay says even helped him get over his lifelong fear of the dentist.

Dentistry from my point of view has become totally painless. And that to me is, is really what changed my attitude about dentistry.

The DentalVibe was patented by a doctor in Florida that took about seven years for a team of engineers to design it. It was approved for market use by the US Food and Drug Administration about two years ago. An updated version was released just this year. Dr. Eby says the DentalVibe should become even more popular for dentists to use. Now that many dental schools across the country are using it.

Thank you, Caroline. For that.

PrevPrevious PostNEWS 12 CONNECTICUT • TV NEWS • DENTAL SHOTS are now PAIN-FREE! See How!
Next PostCBS News reports on how DentalVibe takes the pain out of root canalsNext