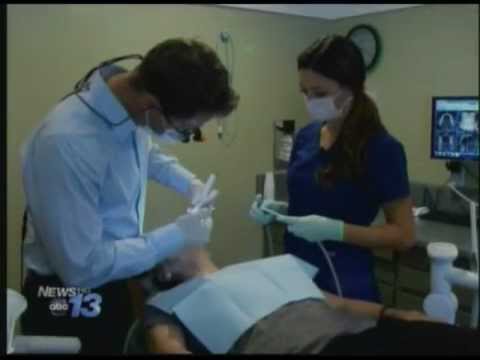 You’re watching News 13 at 5:00 PM with Darcel Grimes, Tammy Watford, and chief meteorologist Jason Boyer. A reality TV star from the upstate says he’s done with show business. But just as he tried to get out of the limelight, he’s back in it because of a new device and technique he’s using in his dental office. Jay Seltzer explains how easing pain begins with a bachelor dentist turned married man.

Reality star Dr. Blake Julian, best-known for appearances on ABC’s The Bachelorette and Bachelor Pad, is now gaining attention for dentistry at his practice in Greenville.

So we can eliminate the pain from the injection and, you know, make dentistry altogether painless.

I’ve always feared the injection, always feared having the needles put in my mouth, but not anymore. Thanks to this toothbrush-like product Blake is among the first to use. The DentalVibe.

Basically, it delivers a vibrating sensation where the vibration travels to the brain first and overloads the neurons so that you don’t feel pain. I use this on every patient that I have when I have to give an injection,

Uh, did not feel the effect of the injection. Uh, I was surprised really. Hello. Blake was surprised when his dental career was interrupted last year after his sister emailed photos of him to producers at ABC, which quickly led to national exposure.

On the bachelorette. Not really expecting to see fireworks or find love. Um, but I ended up having a wonderful time and got to meet some great people.

Those great people. He says where other bachelors he remains in contact with today. Still, celebrity magazines and gossip sites gave Blake strong odds of winning the heart of Ashley Hiebert, a dental student, but he was rejected only to be recast on Bachelor Pad, perhaps best described as a reality game show where the bachelor meets survivor meets big brother, live your own reality, not on the TV show. The scrutiny is just terrible. Holly Durst caught several guy’s eyes on Bachelor Pad, but none more than Blake who had toyed with another girl’s heart only to get caught up in lies and deception in the house.

You have a microphone and a camera on you at all times. And anything that you say or do can be used against you.

What rang true though was Blake’s on-camera proposal to Holly, their subsequent wedding earlier this year and the couple’s new life together in Greenville, we are having a very wonderful marriage in a little town. And I think, I think that’s why we’re going to make it, you know, we’re out of the spotlight and we don’t care to ever go back in it. Oh, I’m so proud. Now, working as her husband’s dental assistant. The two take pride in helping patients feel more comfortable through pain-free cosmetic dentistry. I want to get some other things done and now you will feel more comfortable. Yes. The Julians say they don’t regret taking part in reality TV, but it says to do so you must have thick skin and be prepared to be edited out of context. They didn’t get paid very much money per episode or win a lot of cash, but it says the greatest prize is the love they found with each other. Back to you. That’s a nice story. I have a very happy ending. My teeth don’t hurt. My heart doesn’t hurt. That was really good. That was pretty interesting. I have to admit that.